So, A while ago a game came out about punching demons where it hurts. Now that I have had a lot of time to get to know the game, I feel I can talk about it. Consider this a review of Diablo 3. Honestly I’ve seen a lot of ridiculous claims about blizzard, and said game. So let me give you my perspective on it, and perhaps help you understand why I will continue to happily play.

Lets start with the things players are talking about the most, the RMAH and the assumption that blizzard is using it as a cash cow; And players feeling forced to use both the AH, and the RMAH.

For many people the AH is at the very core of the problem. I’ve heard people saying things like, “Players who don’t use the AH are prone to lag behind the players that do. It eliminates the grind form the end game, and makes you feel like it is the only way to gear up. Why would I even bother grinding for the gear, when I can simply get the best gear for a lump of gold?” And while that is accurate it is also not based on game design but economy development. In Diablo 2 this was seen with the mass duping of items and any new players had a very hard time breaking into that economy. As someone who started roughly one month after the release of D2 I can say I had an incredibly hard time getting into that mode of trade, where gold had been entirely devalued by something else. However, Diablo 3 makes it fairly easy for a new player to break into the trade system, and it helps keep gold relevant. Not only that, but the complaint that they feel it is necessary, as far as I can tell, comes from a type of guilt. Just because it is there does not mean you MUST use it. The notion is ridiculous and only shows Blizzard (and others) you lack restraint. If you feel like you’re okay with it then use it, if you don’t want to use it then simply don’t. The good gear that you are buying had to come from somewhere. It didn’t just incarnate itself; there isn’t some magical loot fairy that is putting those items up. They do drop; you just need to be willing to spend the time to get them. If you aren’t then use the AH, but don’t be mad at Blizzard because you’re being lazy, it’s just ridiculous. 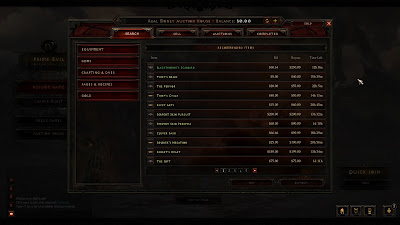 As for the RMAH, it’s on a very similar level I feel the major function of the RMAH is going to be for the trade of in game currency. It serves it’s purpose well and in the same vein of the AH you should never feel obligated to use it. Not much else to be said here.

Now, on to the end game grind, and overall end game content, I’ve heard a lot of people with very good posts about how there isn’t an end game, but D2 didn’t have an end game either. In fact, Compared to Diablo 2, D3 has a much larger and more interesting end game. Once you got to the end of Hell that was pretty much it. What they did have, however, was the ladder. The ladder was the only thing that kept players coming back for more. The loot grind meant nothing compared to it, and PvP in D2 was so underwhelming it pretty much came down to just this one thing to keep players coming back. If D3 were to see the return of this feature, you can guarantee there will be a new influx of players with refreshed interest. Blizzard has stated that they are currently aware that the end game is lacking, so they know there is a problem. You can almost be guaranteed that at some point they are going to look into possible solutions to the end game problem.

One thing that D3 has D2 beat in no uncertain terms is pacing. D2 felt longer and bigger because of the pacing that Blizzard decided to go with. A lot of people don’t seem to understand that larger maps means heavier loads on processors and servers, and more time the player feels is being wasted. D2 did a very bad job with environment size, especially in act 2. Moving through the huge empty areas in the desert did nothing but frustrate me. It’s what basically forced players to “run” for bosses instead of using the world to try and collect the loot they needed.

However because D2 didn’t have a lower level cap, and it had a much more elaborate talent/skill system loot was less of an issue. Even with D3’s better pacing it can’t compete with D2’s much more engaging character-building experience. The only drawback to D2’s talent system was new players typically felt overwhelmed by it, and referred to online sources for “the best” specs so they didn’t mess up their character. It led to very little build diversity, and caused the current skill system in D3. It is quite obvious that were the talent system not permanent from the release of the game, builds would have wound up being much more diverse and much more rewarding when players found that “special build” that let them tear through monsters like there’s no tomorrow. I feel D3 could easily recreate this feeling by adding a “talent” system. It would give you three separate trees to spend points in, and these points would be spent not to monster killing prowess, but instead to environmental influence and character survivability. Increasing the number of possible health orb drops off of a pack pf blues from two to three, or decreasing the time it takes to cast identify and town portal, making potions heal a % more, or even slightly decreasing the cool down on the potion. Simple things that won’t rip the game a new one, but will give players a secondary means to help ready there much loved characters for the challenges ahead. (Mind you I am no game developer, so my suggestions suck. They were simple suggestions.)

I'm going to touch on my opinions of the Required online. While I feel this is where Blizzard has been the least honest with there intentions I can say this. Diablo 2's only relevant feature was it's battle.net functionality. Because of b.net Diablo 2 was burned into the memories of pretty much everyone that played it. The online of D2 had the same issues with lag and rubberbanding that D3 has. This doesn't mean I am all for required online, I strongly disagree with the choice on many levels. But most of all I can assure you that this is just bad business. I feel there should be the option to install the "full" game that would allow you to play offline. I can only assume that Blizzard chose this rout to not only protect their property, but also because the world is already running so many different things they are using the servers to help decrease the burden on your computer. If that is the case, then I feel they should post the system requirements for both online and offline. If your computer can handle the offline, I see no reason why you shouldn't be able to play after a quick login through your b.net account to verify.

And finally on to the topic I really didn’t want to talk about, because it’s just a silly thing to be upset over in my opinion, the changes to stats, and how they are allocated. Stats in D2 were not explained well for new players. One of the biggest causes of “builds” was the fear of not allocating stats correctly. And then once you learned the system it was cookie cutter. Almost all players simply built the stats that were “best” for them and put minor into STR for the ability to equip the desired level of armor. It was a fairly meaningless system that could ruin a character if done improperly. Not only does D3 improve on this but I feel the stats are far more complex “under the hood”. Just because they appear much more simple on the outside doesn’t mean they don’t carry far more depth then D2’s stats. D2 showed you everything. Your chance to hit, dodge, your damage bonuses, and additions to mana, stamina, and health. D3 however, lets players see the basics of the stats effect on their characters and only hints at what they are doing behind the scenes.

So yeah, it is quite clear that D3 isn’t the diamond people were looking for, but honestly, it’s a much better game then it’s predecessors and I have a feeling it’s only going to get better with time. I understand where the developers frustrations are coming from with all these comparisons to Diablo 2. People are simply seeing through a cloud of youth/rage, or whatever it is. I’m not going to say that those people are wrong, because that simply comes down to preferences, but I will say I’m quite smitten with this game, and will probably continue playing for quite some time. Here’s to countless hours spent hunting for that loot, and the excitement that comes from every yellow found.

EASY READ VERSION!
-The AH and RMAH are entirely player driven experiences that help ensure new level 60 players will not have a hard time entering the trading market.
-The end game is lacking, but with some simple additions such as ladders and meaningful PvP that is easily fixed.
-D3's pacing is what makes it feel like it is shorter, even though it has much more content and vastly improved story telling mechanisms
-D2 had a far superior character building system, that was only hindered by a lack of clarity for new players, and a feeling of ruining characters if points were spent incorrectly.
-Stats are, simply put, not part of the character building process. And not being able to allocate them makes the game feel more streamlined and less confusing for new players, while still allowing for seasoned players to enjoy math, and the discovery of some of the finer details.
-Required Online play is the biggest downfall of this game. Sadly, Blizzard has reasons for not changing this policy, be it consumer accessibility, or copyright protection, an offline mode is more then likely not going to happen in the foreseeable future.

Email ThisBlogThis!Share to TwitterShare to FacebookShare to Pinterest
Labels: because I remembered I could post this on my blog, Diablo 3, I never lost, Not even death can save you from me, review, RMAH, that game people play, there are three of them